Word of the Week: haode 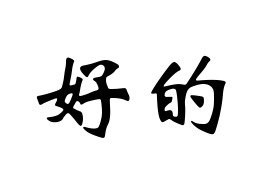 hǎo 好 means good. And de 的 is simply a particle indicating possession, similar to the word “of” or the possessive “s” in English.

de is actually the most common Chinese character, estimated to account for 2% of all written Chinese. Impressive for a word that doesn’t even mean anything on its own.

de is so common because it is also combined with adjectives to indicate a thing possesses that quality. So a Chinese sentence might look a bit like this:

The combination hǎo de 好的 can simply be used to mean “okay”. So if you’re buying some dirty street food in China and your respectable vendor points at the chilli you can say “hao de” (I’m assuming everyone likes chilli here)

hǎo de can also be used like a more informal “thanks”, or “cheers” as we say in Britain. So when the street vendor has finished preparing your fine cuisine and hands it over in a plastic bag you can say ” hǎo de”.

If you do say the word for thank you (xiè xie) it could be a bit too formal and indicate social distance, thus seeming less friendly than not saying anything. It’s perhaps better to just say hǎo de, because In China you can be guaranteed that hǎo de will be one of the most common words you encounter.