Word of the Week: bu dong 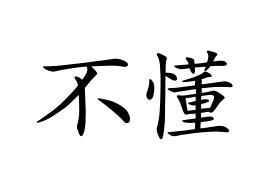 If you start teaching English in China and haven’t learned the word bù dǒng 不懂 then you very quickly will because it is quite likely you’ll hear it multiple times each class. For anyone studying or working in China you’ll probably find yourself using this word even more often than an English teacher hears it.

bù dǒng basically translates as “I don’t understand”. bù 不 is a very common word because it can be used to make both verbs and adjectives negative. So when a Chinese person says things such as “I no like”, “I no hungry” and “I no speak English” you now know why.

dǒng 懂 means understand, and while bù dǒng can be used on its own, it can also be put after verbs, which enables you to be more specific about what it is you don’t understand.

For example, if a shuai ge or mei nv were to write you a Chinese love letter but you couldn’t read it because of all the those Chinese characters, you could add bù dǒng at the end of the verb “read”, kàn bù dǒng. Literally “read no understand”, which is so simple I don’t think it requires further explanation.

Similarly tīng bù dǒng is “listen no understand”, for when someone is talking to you and you don’t have a clue what they’re saying.