Is Chinese an Impolite Language?

Buying anything in China can be difficult when there is a large crowd and no queue, but many English speakers make it even more difficult for themselves by over-complicating the language required.

In English it might be polite to say “can I have a cappuccino please?” when you go into Starbucks. But if you try saying that in Chinese “wǒ kě yǐ mǎi gè cappuccino ma?” they’ll think you’re weird. Why are you asking me for permission to buy a cappuccino? 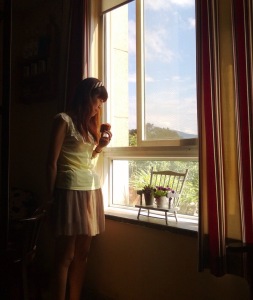 The most common sentence structure would be “lái yī bēi cappuccino”. lái literally means “come” but here can be translated as “bring”, whilst yī bēi means “one cup”.

If you were to walk into a cafe in an English speaking country and demand “bring a cup of coffee” it would probably be considered a little rude. In China, however, it’s quite common to find this very direct way of speaking. Instead of “lái yī bēi cappuccino” it is just as acceptable to say “gěi wǒ yī bēi cappuccino”, that is “give me one cup cappuccino.” 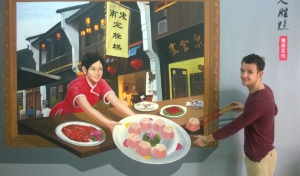 when ordering food you can just say “gei wo…”

Similarly, if your smartphone has run out of battery (as they often do) and you want to know the time then you will most likely approach a stranger and ask “excuse me, do you know the time?” In Chinese you can say qǐng wèn yí xìa (a very polite way to say excuse me) but as for asking “do you know what time it is?” That is far too indirect.

Most times a Chinese person would just say “jǐ diǎn?” (Literally “what time?”) Although I can’t imagine walking up to someone in the street and in English just saying “what time?”

Does the fact that it is perfectly acceptable to talk this way make Chinese an inherently rude language? Some people might think so, but for others it just makes Chinese a far more streamlined and efficient way of speaking. Chinese is essentially lacking what you might call fèi hùa. 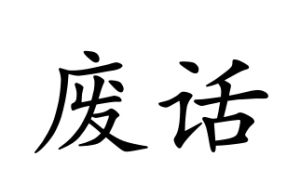 fèi 废 means “rubbish” or “waste”, and hùa 话 means “speech” or “words. fèi hùa is therefore pointless or wasted words. If someone points out something really obvious you can reply with “fèi hùa!” Although the literal translation is “your words are wasted” the meaning in this context is similar to the English phrase “no shit sherlock!”

On several occasions I have been in a restaurant in China, eating with a pair of chopsticks, when a Chinese person has approached me and asked “can you use chopsticks?” The correct response here would be “fèi hùa!” 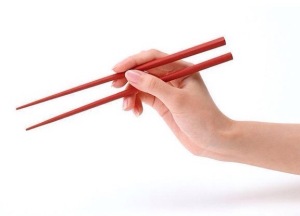 can I use chopsticks? fei hua!

Just as bad are those moments when you’re speaking Chinese and the person you’re talking to points out “you can speak Chinese!” as though you hadn’t realised that for yourself. Again a quick “fèi hùa!” is in order.

Despite the occasional stupid question Chinese is a language often lacking in fèi hùa and in this respect is almost the opposite to languages like Japanese, which has elaborate ways of wording things so indirectly that it would even make English seem in-your-face.

Perhaps English has the right balance, polite without being too obscure, or perhaps Chinese is the superior language, with it’s lack of the kind of polite but ultimately pointless fèi hùa that other languages have. It certainly makes learning Chinese quite easy. The main risk for English speakers is that they try to over-complicate things.