Cheats and Scams in China

Word of the week: pian zi

A Chinese friend once told me that in China you need to be careful because there are a lot of “Cheaters”. Anyone familiar with the Chinese education system will know that is it is common to cheat (zùo bì) in an exam. In fact it is almost expected. If you don’t zùo bì on the high school exam (gao kao) you won’t get into a good university. If you don’t zùo bì at university you’ll fail. If you tell a Chinese student they’re not allowed to zùo bì in a British university they’ll often be surprised.

But I was confused when my friend said that the cheaters in China are dangerous, particularly in tourist hotspots. For a moment I thought they meant cheetahs, as though there are a lot of dangerous cheetahs prowling around Tiananmen Square and the Forbidden City. 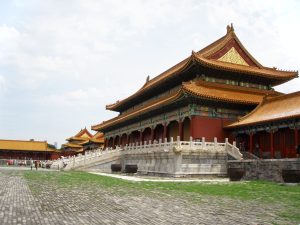 tourists need to be careful around hotspots like the forbidden city

It turned out that what they meant were people who will cheat you out of money. In Mandarin the verb for this type of “cheat” is piàn 骗. piàn can perhaps be more accurately translated as “scam” or “trick”,  and if you piàn somebody then in Chinese you are a piàn zi 骗子. I regularly read the local Chinese papers and it seems that not a single day goes by without me reading a story about a piàn zi.

The piàn zi in China are far craftier than the Nigerian scam emails you’re probably used to. One particularly common scam that piàn zi regularly try to pull on tourists is the “tea lady” scam. This one follows a set pattern in which a (usually young) lady will invite you to try traditional Chinese tea, after which you’ll be taken to a tea room where there are no prices. After drinking you’ll be confronted with a bill that is anything from several hundred to several thousand RMB.

One friend of mine encountered this scam in Beijing. Like many before him he was approached by a young lady and asked if he could take a photo for her, after which she started chatting with him. My friend grew suspicious because she didn’t actually look at the photo he took, which is very strange behaviour for Chinese girls who usually immediately upload their pictures to social networking sites and spend a long period of time looking at them. When the piàn zi eventually asked him if he would like to join her for some Chinese tea he politely declined.