Leaving this sound out from any list of pronunciation problems for Chinese speakers would be a controversial move. /θ/ represents the “th” sound present in words like “three” and “think”. Literally millions of Chinese people have nearly bitten their tongues off trying to get it round this sound. It’s a phoneme that is so different from anything in Mandarin that there is a real sense of urgency in trying to get it right – at least for those who care about their pronunciation. Even more difficult for Chinese speakers is /θ/ followed by /s/ without any intervening vowel sounds, such as in words like “months”, “paths” and “deaths”.

Some words change meaning slightly with different syllable stress, most notably the distinction between vowel and noun. Consider the question “who will record this record?” The word “record” has two different syllable stresses depending on whether it’s a verb or a noun. There are well over 150 words like this in English. But it doesn’t stop there, every word contains some sort of syllable stress and if you want to sound natural you need to learn it. And if that doesn’t sound like a big enough task the Chinese learner needs to remember that American, British and Australian English can sometimes have different syllable stress for the same words. Having natural pronunciation means choosing carefully which one you go with.

This is related to syllable stress and like syllable stress can be different depending on whether it’s American or British English. For example when a word ends in a consonant and the following word begins with a vowel then the final consonant will, generally speaking, move from the end of the first word to the start of the second word. “An apple” is therefore pronounced “a napple” and “you’ve got a fat ass” is pronounced like “you’ve go ta fa tass”. Also, when a word ends in a vowel and the following words starts with a vowel then then a consonant sound will usually appear, so “me and you” becomes “me yand you.” If a Chinese person wants to learn British English pronunciation it can be even more difficult because in many words there is a hidden /r/ at the end. For example “teacher” ends in the schwa vowel sound /Ә/ and “far” ends with the long vowel /ɑ:/. The /r/ only appears if the following word starts with a vowel, in which case it appears at the start of the following word, not at the end of the word it was originally hidden on. Consider how “the teacher is far away” is pronounced like “the teach-uh ris fa raway”.

Perhaps it’s because there is so much emphasis on standard pronunciation within the Chinese education system but Chinese people often seem unable to pronounce place names without adding Chinese tones and pronunciation. Even speakers who are able to accurately replicate the sounds and syllable stress of native English speakers throw everything they’ve learnt out the window when saying a Chinese name. When Chinese people are speaking Mandarin “London” is pronounced lún dùn, yet they often fail to understand the reverse also happens; that when native English speakers say a Chinese name in English the pronunciation changes to fit the sounds of the English language. Maybe that’s why so many Chinese people adopt an “English name”.

No matter how good their pronunciation might seem a Chinese speaker will almost always fail when it comes to words ending in /l/. There are two factors at work here. One is that the final /l/ is difficult for Chinese people to pronounce because it doesn’t exist in their language. Another problem is that, unlike other sounds such as /θ/, there are sounds in the Chinese language that seem close to final /l/, most notably /r/. Whilst Chinese people will consciously work hard to pronounce /θ / in words such as “three” and “think” they don’t feel the same sense of urgency when correcting /l/ and as a result even the most advanced speakers are usually unable to distinguish “or” from “all”, “war” from “wall”, “more” from “mall”. This list could go on.

In Mandarin there are a lot of sounds that sound very similar for native English speakers. X and Sh are often hard to distinguish, as are the aspirated and unaspirated Qu and Chu. Then there are some sounds we think we can distinguish easily, such as T and D, but these sounds can be even more problematic because we pronounce them like the English T and D, which are slightly different. However, going from personal experience (feel free to disagree with me) I’m going to vote Zh and J and the two most difficult to distinguish. This is particularly unfortunate for Chinese people with the surnames Zhang and Jiang, because they’re usually pronounced the same by English speakers. That is, with the English /dʒ/ at the start.

Whilst English has syllable stress within words Mandarin doesn’t. In theory this should make Mandarin easier for the English leaner than English is for the Chinese learner. The problem is that many English speakers, particularly in the early stages of learning the language, involuntarily add what they feel to be natural syllable stress. This is important not to do because in English the vowel sounds of unstressed syllables change slightly. If you make a syllable unstressed in Mandarin you’ll most likely say the word incorrectly because you’ll not only change the vowel, but also the tones. Although Mandarin doesn’t have syllable stress within words it does have contrastive stress within sentences. Unfortunately many native English speakers will feel the urge to change the tone of a word when stressing it. Some people struggle to believe that you can stress a word without changing the tone. The fact is you can, and if you want to know how to correctly stress a word in Mandarin you need to spend time listening to and copying native speakers.

Mandarin is a tonal language. The biggest difficulty faced here by English speakers is the fear that created by the idea of speaking a tonal language. This could damage a student’s confidence before they start, or even worse put them off completely. The fact is the four tones of Mandarin aren’t really that difficult. But they start to get tricky when they change as a result of tone sandhi. For example first tone becomes second tone when followed by fourth tone. Third tone becomes second tone when followed by another third tone and some tones disappear (is that a fifth “non-tone”?) But the most difficult is perhaps third tone, which becomes a semi-third tone when followed by second tone. Although there are four tones there are in fact 20 tonal pairs to get your tongue around. Check out this link for a full list.

2.Reading from pinyin without tone marks

In China there are a lot of Chinese characters. But there is also a lot of pinyin; you see it under the characters in street signs, in shop names and adverts. Unfortunately the pinyin you see around China almost never contains tone marks. For native English speakers whose eyes are drawn to the Latin alphabet a lot quicker than the Chinese characters it can be very tempting to start pronouncing words on the basis of the pinyin. If you start reading pinyin without tone marks then you have no choice but to guess the tones (some people even start to invent their own tones that don’t even exist in Mandarin). This is a very bad habbit to develop because every time you say a word incorrectly you are teaching yourself and reinforcing incorrect pronunciation. As annoying as it may seem I advise that no one attempt to read a Chinese street, place name or shop name on the basis of toneless pinyin. If you don’t recognise the Chinese characters you must look them up in a dictionary. 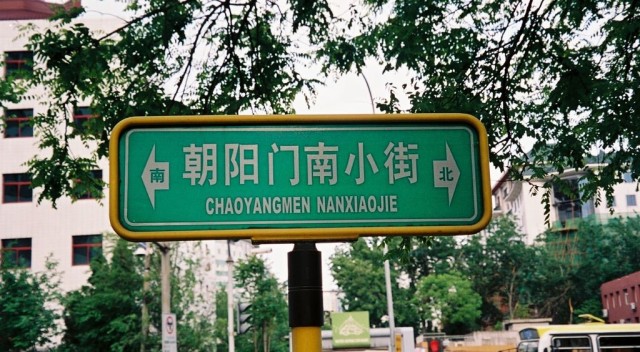 The pinyin on Chinese street signs is useless without tone marks

Even the most advanced and native sounding Mandarin speakers sometimes stumble when it comes to words like rè and rì. If there is one last word that is gives away that you’re actually a native English speaker then it will most likely be a word starting with the letter r. If you go online and try finding some old TV interviews with the American born Taiwanese singer Wang Leehom (wáng lǐ hóng) you’ll notice that there was a time when his Mandarin wasn’t as good as it is now, and it’s the words beginning with r that really give away his first language.

Which is more difficult?