Many people believe that reading Chinese is somehow quicker than reading English because the nature of the characters means that readers can jump straight to the meaning without the sounds.

To make use of an alphabetic script, where characters stand for single sounds, children must learn to segment a word into smaller units (its sounds) and to associate them with symbols or letter that stand for them – for example, when you see s, say “Ss”; when you see i, say “ih”; when you see x, say “ks”; so when you see s-i-x, say “s-ih-ks”. The letters are cues to saying the sounds. You put the sounds together and you get the word, and then from the word, you go to the meaning. By contrast, with whole-word symbols, or “logograms,” a symbol stands for a word; for instance, the number 6 stands for the word six So, the “rule” here is, “if you see 6, say ‘six’”. It might seem easier to go directly from the symbol to the meaning without going through the step of translating the letters into sounds and then connecting the sounds into a word on the way to the meaning. In fact, some writing systems, such as the one used in Chinese, do exactly that.

Although this is a fairly accurate representation of how we learn to read English at school, it almost certainly isn’t what goes through our brains as adults. When we look at a word we don’t really look at the first letter, then the next letter, then the letter after that. We look at the word as a whole and jump straight to the meaning. This fact is surely proven by that famous piece of “rechsearch” that clearly didn’t take place at Cambridge University (otherwise they would have probably put in the right number of letters to spell “research” correctly.) 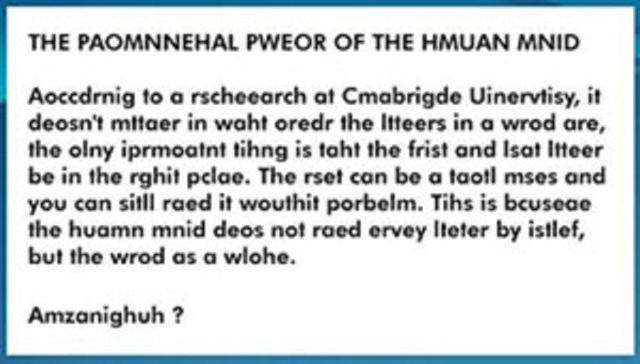 The origins of this writing aside (I’ve seen it make the rounds on the internet a few times) it does raise a legitimate point. When we read English words that we are familiar with it really isn’t any different to reading Chinese characters.With Chinese characters we jump straight from word to meaning. Don’t we do the same thing when we read English?

The fact it is possible for us to read in English without reading out loud suggests that the words we see can be detached from the sounds that they represent. When we see the word “read” we can read it two ways, yet when we see it written in context we never accidently read it the incorrect way. We know what the word means, we see it in context and we know what tense it should be. If anything the word “read” is evidence that we first see the word as a whole, take in the meaning, and then decide on the pronunciation on the basis of what tense we know it should be, not on the basis of how it is spelt.

Similarly, the colour “red” is pronounced the same as the past tense “read” yet when I see “red” written down I never accidently confuse it for “read”, even when it’s written on its own without the context of a sentence to help. The explanation is that we take the meaning of a word from how the word appears when written down. We don’t turn the letters into sounds and then base our understanding of that word on the pronunciation of those letters.

Another interesting thing I’ve noticed is that when fluent English speakers read something out loud they will sometimes alter the text automatically. They add the occasional word, for example “He told me ‘get out!'” might be read with ‘to’ placed in the middle. Grammatical errors might be corrected without even noticing that there was an error. I suspect that when we read we are subconsciously anticipating what comes next, and when our prediction makes more sense than what is written (as is the case with grammatical errors) we occasionally just read what we were expecting to see.

This theory would explain why students can still have so many typos in an essay even after proof reading it several times. Similarly, when I applied for the Daiwa scholarship in 2013 I proof read the application several times but somehow still missed the glaring typo that was the misspelling of Daiwa in the very first line of the application. Perhaps they too didn’t notice and just saw the spelling they were expecting to see because I was still invited to a couple of interviews.