What To Say When Your Chinese Friend Is A Phone Addict

Word of the week: kòng

You can add kòng 控 onto the end of a few different words to indicate that a person spends too much time on that thing. For example diàn nǎo kòng 电脑控 for someone who is always glued to their computer screen, or yóu xì kòng 游戏控 for someone who spends more time in computer game world than in the real world. 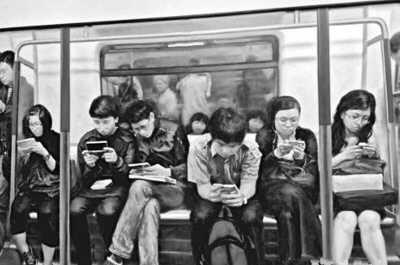 shǒu jī kòng on the subway

shǒu jī kòng sounds a bit light hearted. If you think the person actually has a real problem you can say nǐ yǒu shǒu jī yī lài zhèng 你有手机依赖症 which translates as “you have phone dependence disorder”. I’m not sure if yī lài zhèng (dependence disorder) is really a legitimate medical condition, particularly the phone variety, but it certainly sounds more serious than shǒu jī kòng. You can also add other nouns in front of yī lài zhèng to indicate an over-dependence on that thing.

All this talk of shǒu jī kòng and shǒu jī yī lài zhèng reminds me of a time I was at karaoke with some Chinese friends. As usual there was one girl spending the whole time on her phone and so my friend, an overseas Chinese from Spain, shouted out: