Movie of the Month: Operation Mekong

This fast paced action film took the Chinese box office by storm when it was released towards the end of 2016, raking in over one billion RMB in ticket sales in less than a month. Although it’s now no longer showing in cinemas you can view it on Chinese video streaming sites such as Youku.

The story claims to be based on true events known in English as “the Mekong River massacre” (méi gong hé shì jiàn 湄公河事件). In reality the only part of this movie that seems to be based on anything remotely real is the first five minutes, when a Chinese boat on the Mekong River (in Thailand) is hijacked by drug traffickers who murder the crew, and the last five minutes of the film when the drug lord responsible is extradited to China and sentenced to death. The remaining 110 minutes of this film’s two hour running time are complete bollocks. But the good news for film fans is that it’s highly entertaining bollocks, a fictionalised version of manhunt for the drug lord Naw Kham (nuò kǎ 糯卡) who was responsible for the massacre.

The film is at times violet.  In one torture scene the undercover policeman fāng xīn wǔ方新武 (played by Taiwanese actor Eddie Peng) ties a drug gang member to a chair and brutally beats him before graphically slashing him with a knife and threatening to let him bleed to death if he doesn’t give him information. Compared to a lot of Chinese films I found such violence to be realistic but not over the top. 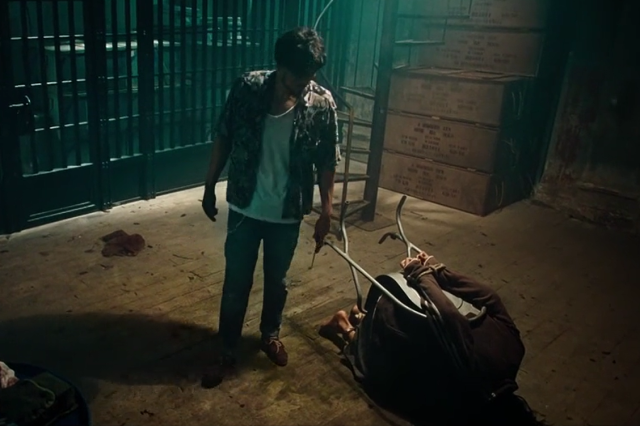 Unfortunately the plot can at times be a little complicated for non-native Chinese speakers to follow. There is rivalry between drug gangs as well as the Chinese operatives trying to capture Naw Kham and this can at times leave you wondering who is who. This problem is compounded by the fact that the drug gang members are often speaking in South East Asian languages and if you’re not quick enough to read the Chinese subtitles you could miss out on a lot of the dialogue.

That said, the plot itself has all the elements needed for a decent action film. There are hand to hand fight scenes as well as gun battles, a car case, a boat chase, a rescue operation, a sting operation and a final showdown in which not all the good guys make it out alive (they do sometimes take a few too many bullets before going down, but that’s the same for most action movies).

The only thing I disliked about this film was the fact it at times seemed a bit like Chinese government anti-drug propaganda, along with a lot of accompanying rhetoric about China’s greatness (particularly at the start and the end of the film). There was also a lot of fast dialogue and it was a bit more difficult to follow than a lot of other Chinese films I’ve watched. That said, even if you don’t follow that much of what is said you only need to have a rough idea of what is going on and the film will be a lot of fun. Well worth watching if your a fan of over the top Hollywood style action movies.