Why is China So Noisy?

Word of the Week: rè nao

For some reason Chinese people seem drawn to those restaurants where you have to sit outside on a cheap little plastic stool for an hour before getting in. It seems to be a social phenomenon particularly common in (but not limited to) department stores. 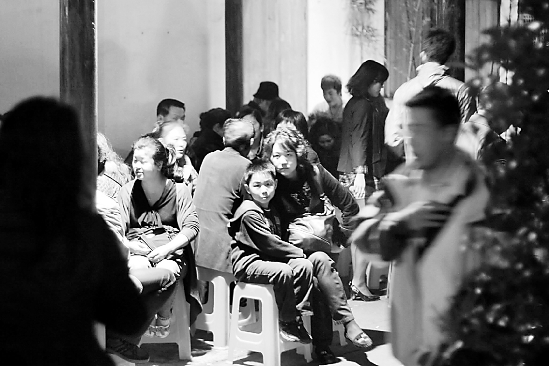 For me, it’s usually the last kind of place I want to go. Can’t we go somewhere with a bit of ambience? Somewhere we can sit and chat without the noise made by crowds of people both inside and outside the restaurant?

Chinese people call this rè nao 热闹 which is often translated as “lively” and “noisy”, but with good connotations, like a party.

When I’m in the mood for a party I enjoy a bit of rè nao as much as the next person. Although in China I sometimes find jostling crowds of people being sold to me as rè nao by Chinese friends when I’m really not sure it is.

If you want to say a place is noisy with negative connotations you can use the adjective chǎo 吵, which can apply to places and people.

You can also use chǎo as part of the phrase dà chǎo dà nào 大吵大闹 which is used to describe people when they’re making a lot of noise. It’s not really used for places. I was once in the hospital and saw a kid kicking up a huge fuss, screaming and crying because he didn’t want to have an injection.

You can also use it for people who are not consciously being noisy.

Although my wife usually says her family are rè nao and not dà chǎo dà nào.

The word for quiet is ān jìng 安静which usually have good or neutral connotations. However, Chinese primary school teachers often shout ān jìng as a way to get their students to shut up when they’re being too chǎo, so it probably has slightly negative connotations when used this way.

If a place is a little too quiet in the eerie sort of way you can say zhè gè dì fang hěn jì jìng 这个地方很寂静 (this place is eerily quiet).

The adjective jì jìng 寂静 means that sort of quiet with negative connotations. It is commonly used to describe things such as graveyards and the dead of night. The name of the video game and movie Silent Hill is translated into Chinese as jì jìng lǐng 寂静岭 (eerily quiet hill). Although with the high population density in Chinese cities there might not be that much opportunity to describe things as jì jìng.